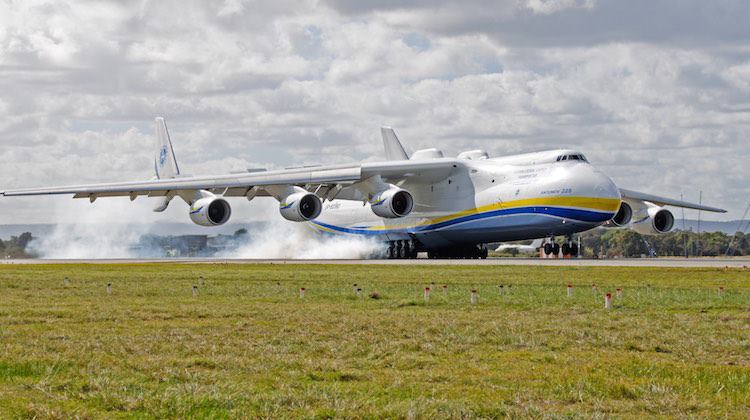 The world’s largest aircraft, the Soviet-era Antonov An-225 Mriya, landed in Perth on Sunday May 15th, the type’s first Australian visit.

Originally scheduled to arrive at 10:00am, the 84m long aircraft touched down just before midday on Perth’s Runway 21. After clearing the runway, it was treated to a water cannon salute, with over 20,000 spectators watching on.
The aircraft is in Perth to deliver a 117-tonne generator, and is scheduled to depart on Tuesday. Anticipating large crowds for the arrival, Perth Airport arranged special viewing areas including an ‘Antonov Viewing Area’ off Airport Drive for spectators to witness the historic landing.

However, despite best efforts, the aircraft’s arrival caused chaos on the roads near the airport, with traffic at a standstill for much of the day.
The arrival attracted hundreds of people to the Dunreath Drive viewing platform, which reached capacity just after 6am. Some enthusiasts resorted to sleeping under the stars to get access when the gates opened at 5am.
Thousands of others headed to T1 International’s viewing deck, which had not seen such crowds since the Concorde visited Perth in the 1980s.

The aircraft can be seen from the Public Viewing Deck at T1 International until Tuesday, however registration is required at check-in counter 41 to access the viewing deck.
Developed originally to transport the Soviet Union’s version of the Space Shuttle, the Buran, the An-225 is a development of the An-124, and first flew in 1988. Named Mriya, Ukrainian for ‘dream’, it has a maximum takeoff weight of 640 tonnes, a wing span of 88 metres and a cargo volume of 1,300m3, while each of its six engines generates more than 50,000lb of thrust. Production of a second An-225 commenced in the late 1980s, but it was never completed.